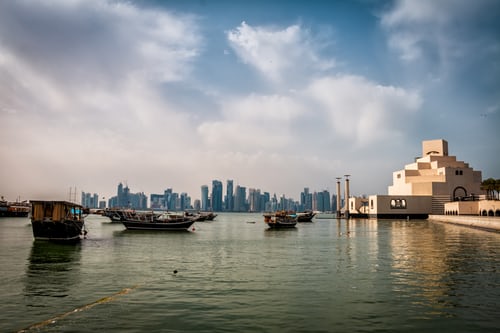 Qatar is one of the most exciting and rapidly changing countries in the world. The country, located in the heart of the Arabian Gulf, is a fusion of old and new.

In 2019, Qatar topped the Forbes List of the Richest Countries as a result of its oil and natural gas reserves. The country has one of the highest standards of living and is one of the fastest growing economies in the world.

Qataris are well known for their generosity, hospitality and friendliness. Qatar has a rich Arab culture, which is reflected in the wealth of its customs and traditions. Whilst Arabic is the official language, the most commonly spoken is English.

Islam is the official religion and the Islamic influence can be seen throughout Qatari society and is evident in clothing, eating and drinking practices.

In Qatar, a high quality of free or highly subsidized healthcare is provided to all nationals and expatriates.

Qatar is investing heavily in improving the quality of its healthcare provision.  Central to these efforts is the commitment to provide international standards of care within a comprehensive and integrated healthcare system.  To realize the vision, Qatar’s Supreme Council of Health has undertaken a five-year program of reforms, which builds the foundation of Qatar’s National Vision 2030.

Qatar is one of the safest countries in the world and is ranked 30th out of 163 countries in the Global Peace Index, the highest in the region. Incidents of violence are rare in Qatar and crime rates are generally low. The Qatar police force is highly visible and capable, providing a high standard of security. Confidence in Qatar’s security and political environment was highlighted by the state receiving the rights to host the 2022 FIFA Football World Cup.

Education has been a major focus of the Qatari government in recent years, with a particular focus on women’s education. Every child has free education from kindergarten through high school and there are a large number of private and international schools. In addition, Qatar Foundation’s Education City, created as a center of educational excellence, houses international universities from the U.S., UK and France.

Qatar has one of the strongest economies in the world. In 2017 Qatar had a GDP growth rate of 1.90 and a GDP per capita of $66,415, the 6th largest in the world at the time. The country is the second largest exporter of natural gas in the world – export of Oil and Gas accounts for approximately 50% of Qatar’s GDP.

In addition to this the country is investing thoughtfully in other industries, particularly the financial and tourism sectors, as well as infrastructure, aviation and utilities. The country is becoming a major international center for sports and energy events. The successful bid to host the football World Cup 2022 has raised Qatar’s profile globally, and will attract a large number of tourist to the country.

Qatar is a peninsula, surrounded by the Arabian Gulf and Saudi Arabia. The land is primarily flat and desert-like; however, there are beaches and large sand dunes in the southeast along the Inland Sea

Doha is the capital of Qatar and the seat of government. Doha is also home to the country’s main seaport and international airport. Other major cities in Qatar include Al Wakra, famous for its ancient Islamic architecture, Mesaieed, known for its fine sand beaches; and Dukhan, the center of onshore oil production.

The climate in characterized by a mild winter and a hot summer. The country has a low annual rainfall, which occurs during the winter months. Autumn and spring are warm with maximum temperatures between 25 -35°C, and the summer (June to September) is hot with temperatures reaching 40°C and above.

Would you like to read more about life in Qatar? See our next post: Living in Qatar – Part 2.